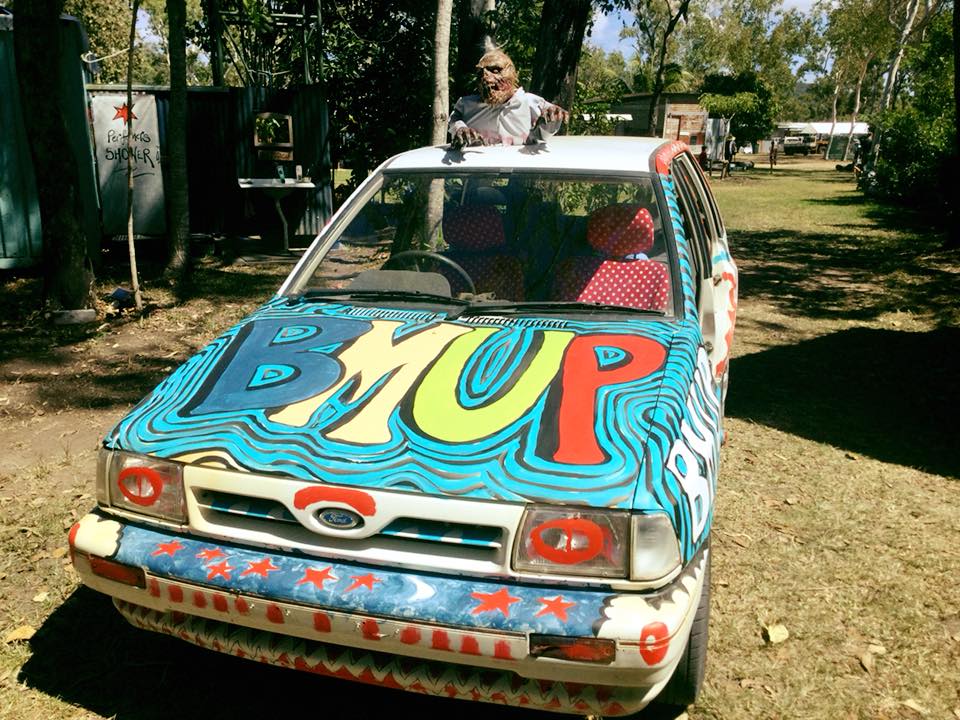 Festival Antics in FNQ by Rasela

Unlike any other place I know at the moment, festival season up here in FNQ has been in full swing.  From the local intimate 500 people gathering at BMUP (Black Mountain Unplugged) in the shadow of a pile of magma boulders surrounded by fresh water springs, to the 3,500 electronic music gathering of Ori Naya just 10 or so k’s up the road at the feet of mountainous green giants, to Wallaby Creek Festival where 1,500 local lovelies (and a few out of towners) met in between the middle of both for music, theatre and cabaret goodness, it has been ON.

There’s a difference to the festivals up this way. I’m not sure if you have been to many large gatherings yourself and if so what types of gatherings they may be but I for one have had my fair share. Never have I seen anything quite like what I saw up here though and there’s something I just HAVE to share with you.

It’s tradition as we know to have some form of welcoming/opening ceremony and to end with a closing ceremony. Well at BMUP I witnessed a closing ceremony like no other. I’m not sure if this will translate into words as well as if I could share it in person and reenact the actions of this monumentally memorable event but I’ll give it a go.

Celebrating it’s 10th year the BMUP festival went on for 10 days which consisted of two weekends and some down time throughout the week in the middle. You can imagine the vibe of a bunch of friends and families who had stayed the whole time and were exhausted but excited to take their places for the closing event.

Everyone was called to the stage and a choir who had been learning gospel in a workshop gathered to serenade us side of stage. Almost as soon as their angelic voices started, so did the arrival of a cut up old Toyota Landcruiser of which the back had been replaced with a gigantic metal structure, wrought iron and tin, shaped with one very long appendage, perfectly fingernailed, jutting out to the heavens above. As it rolled delicately towards centre stage, three men holding large glasses of cold beer in the air (one sitting on the front bumper shouting ‘yeeeeeaaaah) all eyes and focus turned away from the sweet singing choir and onto this contraption of which no-one could entirely make out the meaning of until it was explained fully.

A husky rugged voice came on the mic from the direction of the stage and we were told that this structure had been built exactly to specs and had something a little extra to it. It was revealed that it was in fact a hand with a huge finger pointing up, the finger that entices trouble if you ‘give it’ to the wrong person. The very special addition to this structure was that it turned by a handle operated by the creator of this giant fingered hand. A huge roar went up in the crowd when it did so.

Then the commentary took a new turn. After further explanation and clarification of what the finger did and how it worked the voice on the mic said something like “Who do we want to give the finger to first? Lets give it to the band from New South Wales who pulled out of the festival at the last minute because they got a better offer. Spin the finger to face NSW (a mighty cheer from the crowd). Now everyone, give em the finger”. At this moment the entirety of the festival (except me who was in a state of disbelief and slight shock) lifted their hand, arm, face in the direction of NSW and all gave it the finger with such conviction I was momentarily stunned.

Bringing me out of my stunned state the voice on the mic continued “Now, who’s next?! Xavier Rudd (a cheer goes up) This one goes out to Xavier down there in Noosa or wherever he lives, spin it round to the Easterly Coast there will ya, this one is for you Xavier sitting in your 6 million dollar mansion eating KFC, everyone, give him the finger” and the entire festival again with total and absolute conviction and extra grunt raises everything they need to to give Xavier the finger.

By this stage I am laughing and revelling in the authenticity of this arid country and it’s interesting people and their even more interesting ways. “The next one goes out to all the governments in the world because they’re all fu%#ed up”. Now this I can relate to. “Lets spin the finger around full circle so we don’t miss any of them and everyone, lets give them all the finger!” I raise my own hand and with a smile I join in. There’s a guy standing in front of me, one hand holding his beer, the other shaking with the energetic verocity he is putting into this action while simultaneously letting out a crackly ‘yeeeeeaaaaah” in that ever so recognizable sound of a voice that has seen many a week long festival and the smoke of many a cigarette. At some point the finger is driven away on the old Landcruiser and the festival wraps up for another year.

The purpose of travelling is not to see new things, but to see the same things through new eyes.

Far North Queensland, I love you.

If you liked what you saw share the love